As an RECE with a full day Headstart Nursery School, I found myself struggling with my concept of a successful circle and what was unfolding around me this past Fall. To put it mildly, my group’s circle time was chaotic. My goal was to assemble the eight children, sit, sing and read for 15 to 20 minutes. Honestly, assembling and sitting as a group was enough of a challenge. How was I to get them engaged or read an age appropriate book when I could barely contain them? What was I doing wrong?

My first step was to really look at my group: what were their individual needs; what developmental stage were they each at? Of my eight children three were learning English as a second language (ESL); and three others had developmental and/or language delays. It was time I adjusted my expectations and tuned into the needs of the group. 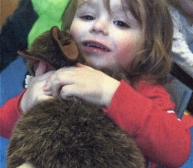 What proved successful was repetition, which allowed all of the children regardless of language ability or developmental stage to know what to expect. Our greeting song proved a warm welcome that pulled even the most reluctant child in, thanks to the use of a soft cuddly animal hand puppet. As the puppet sang to and greeted each child, they could interact with it as they chose: a gentle pet of the soft fur, a shy smile, a wave or hug. Our array of songs started off small, with a few favourites that included gestures and movement. The more reluctant children seemed to find comfort in songs that used movement, as they were able to participate without the use of language.

Once we mastered the 5 minute circle and children wanted to assemble, our circle time grew in terms of the duration and activities. Different items and elements have been slowly introduced as a means of providing the children with opportunities to participate. Manipulatives such as bells, coloured scarves, shakers and flannel boards were introduced with the goal of having each willing child interact with the pieces. Group games such as “Hot Potato”, “Ring Around the Rosie” and “Who Stole the Cookie from the Cookie Jar?” have been well received and have allowed us to practice turn taking.

While reflecting on my approach to circle time, I also chose to view literacy as more than just sharing a book. In the beginning, a variety of short activities appealed to the group, such as passing out laminated personal name bars to the children. This allowed us to talk about letters, recognize our names in print and talk about who was at school and who was not. We also started a group alphabet binder. As part of the activity, we talk about a letter: practicing the sound(s) that it makes, talking about and describing how it looks in print and feeling the lines and curves of a foam letter. Every week each willing child helps glue on pictures that start with the letter that we are discussing. These images also include photos of peers. As the group gained some experience with literacy, their collective excitement grew.

Short books were introduced and chosen based on interests observed during the children’s play. The book would be covered over the week. Initially we may have just talked about the cover and what we saw; the next day we may have read a couple pages; by the end of the week we would have finished our book. There were days when the story was cut short because the group lacked interest or the ability to focus their attention. Overall, the interest in story time was growing. Recently, preschool level 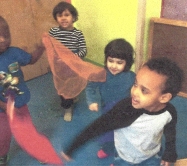 picture books, fiction and non-fiction, have been used with the group. There are days where we may read an entire book during circle time, which is a thrilling new development. A recent book that has been a group favourite is Ann Margaret Lewis’ Fly Blanky Fly. We use coloured scarves so each child can engage in the actions that Sam and his blanket enjoy throughout the story.

Circle time has taught me that I need to appreciate and understand the stages of development of the individuals in my group in order to meet their needs and those of the group as a whole. Movement, manipulatives and fun help to engage the children. Today, we are successfully participating in 15 – 20 minute circles, where we are meeting to talk, sing, move and just enjoy being together as a small group. I find myself looking forward to our circle time and bringing new elements to this outstanding group of preschoolers.